skip to main | skip to sidebar

Why is boasting bad for business?

This post is part of the 10th Anniversary of the Cluetrain Manifesto which concluded that 'all markets are conversations'. Numerous bloggers volunteered to write about one of the 95 theses of the manifesto in the Cluetrain Plus 10 project. This one is about #24.

Bombastic boasts - "We are positioned to become the preeminent provider of XYZ" - do not constitute a position.

The above sounds like the description that a myriad of companies use in their annual report or as a synopsis in a job posting. So, what's wrong with this statement?

Here's a list:
Positioning is about creating and occupying a place in our minds that resonates with a need. It gives us something to talk about. Think automobiles and play the word association game.
Each of these product lines owns a term in our minds. They are well-positioned. In fact the products have done that job so well that we tend to trust them to deliver on the promise behind the word. They have become brands.

The Bombastic Boast makes no promise or contract with us; it is a company-centric claim about being a seller of XYZ with no clue on what it is useful for or why we should care.

Positioning puts a stake in the ground. It defines the market a product serves as well as those it does not. No product should attempt to satisfy everyone's needs. That is a recipe for ending up in the 'mushy middle' -- a place that sounds rationally attractive because it covers the largest group but in reality is a patch of quicksand that we tend to avoid.

So how should the makers of XYZ position themselves?

Successful positioning requires three elements - 1) a category, 2) an audience, and 3) a set of proof points.
Positioning works by satisfying our needs on our terms. We'll talk about that.

Boasting about yourself rarely accomplishes anything more than self-gratification. Besides, we don't listen.

Why are my reading habits changing?

I don't know if it is the fact that I'm AARP eligible or just becoming a curmudgeon but I'm really tired of fighting to read. In the rush to augment revenue streams online content is often peppered with obstacles that distract and interrupt my reading. Here's an example from today: 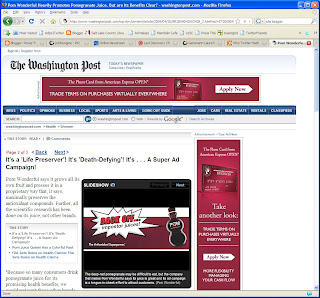 There are only 51 words of content among the glitz and glamor of ads. Plus, the content on the rest of the page goes through a chicane to the right side of the page. I doubt the folks laying out a print version of this story would chop it up like that.

Now, I happen to like pomegranates and think the article on their marketing was good. The included slide show was a bonus. But I had to struggle reading it. Here's what I'd prefer:

A message to publishers: Don't make me navigate content like a Formula 1 race track where corners are the point of the race; I'd prefer a nice drag strip where the focus is on the finish line.

Maybe the business model is micro-payments; not to eliminate ads but to comprehend.
Posted by anthony at 4/24/2009 0 comments

The Sounds of Swirling

What happens after the toilet flushes?

Somebody pulled the handle and we're all wondering what happens next. A spate of articles and posts recently have discussed the newspaper industry, advertising budgets, social/digital media and the economy. It is clear that they are all spiraling around trying to figure themselves out. So, what happens when its all said and done? Will the bowl fill back up?

Starting at the macro level, many industry firms are suggesting a decline in global ad spending from 5 to 10%; that translates to somewhere around $15b to $25b in the US alone. These are relatively easy cuts to justify since they are external spends and don't involve operations or staff. Note that from the vendor point of view this equates to 20,000 jobs in ad agencies using traditional rules of thumbs.

Advertising spend equates directly to pages of magazines and newspapers. Pages are dropping faster than spending - down 26% in first quarter. The old corollary was to track pages of advertising to find trends - fat mags are hot topics; but now skinny is the new black. If there is less spending then the container is much smaller. If the container is smaller there is less revenue to pay for the creation of content. While it is correct to think about the separation of editorial and advertising, the amount of the former is dependent solely on the latter.

Newspapers, and analog distribution methods in general, run the risk that their content and revenue models might someday be separated like Siamese twins. It happened in music with the melting of the jewel case, its now happening in words. Here's a list of where 'newspaper' content has gone along with some thoughts on the rest of the product attributes. It once again proves that categories don't converge, they diverge - just look at all the niche options (Craig's List, Flickr, Yelp, etc.) that have sprung up to satisfy individual aspects of what was once the newspaper.

Social media is a relevant tool for marketing; but that doesn't mean it is a replacement for advertising. It works for recommendations but possibly not so well for other purposes of messaging. And even online marketing, one area where spending is up slightly, is not as cost effective to run as broadcast. Both forms of digital are labor intense and have scalability concerns. In addition there is a false sense of performance - just because we can show engagement, it does not always mean sales.

The general economy discussion focuses on resetting consumption patterns -- we simply use too much stuff. The credit crisis, debt load, uncertainty about the future, layoffs and pay cuts all are ratcheting incomes and spending back and saving up. This double-barreled blast drastically changes one's view of 'disposable income.' If the human mind is reset, then it is quite possible that consumer spending will not return to previous levels once confidence is regained.

All this leads to the question: What does the toilet bowl of the future look like?

What role does social media have in marketing?

Earlier today Brian Solis posted a good piece on the Conversation Index that included the line:

While I agree with and wrote about the premise that social media should not be considered another broadcast channel to say it isn't marketing seems to equate marketing with advertising.

Marketing is so much more than advertising. Its a shame that the size of the advertising budget often masks the more important functions:
In the broadest sense:

On #journchat last night this point picked up some support in discussing PR and Journalism. Marketing is the alignment of a pitch (solution) with an article (need) to the readers' (everyone) benefit. This is done by building relationships, understanding the audience, and listening in order to tell stories, which just happen to be the best sales tool ever.

What better opportunity to 'do marketing' than to participate in social media?
Posted by anthony at 4/14/2009 0 comments

The recent announcements and closings in the newspaper industry might be the start of a downward spiral of closures. It's possible that eight of the top 50 papers could close in the next 18 months. Clay Shirky' essay "Newspapers and Thinking the Unthinkable" discusses the issues around the point that ...

We have seen this problem before: "Appetite for Self-Destruction" by Steve Knopper covers the music industry's migration from from analog to digital over the past three decades. The digital solutions don't look anything like album art wrappers for shiny discs.

Digital avoids the need for and costs of containers that made the two business models run - printing presses and plastic molds. Without a container, the content will go someplace else. In a recent speech George Colony of Forrester made the point...

It won't be like the wildebeest moving en mass to greener pastures. Because the container acts as an aggregator newspapers represent the head of the information tail - a few properties with the most reach. So if the head gets cut off it won't grow back but rather it seems likely content will move into the long tail. This makes it possibly more relevant and more difficult to find. Hyper-niche markets emerge tailored to smaller segments. But there is no reason to assume that different types of content will end up in the same form factor. Fast breaking news is headed toward twitter, op-ed is headed to blogs, sports to team/league centric portals, and classifieds have already left the building.

anthony
A marketing analyst and technologist focused on developing insights that change how we market.